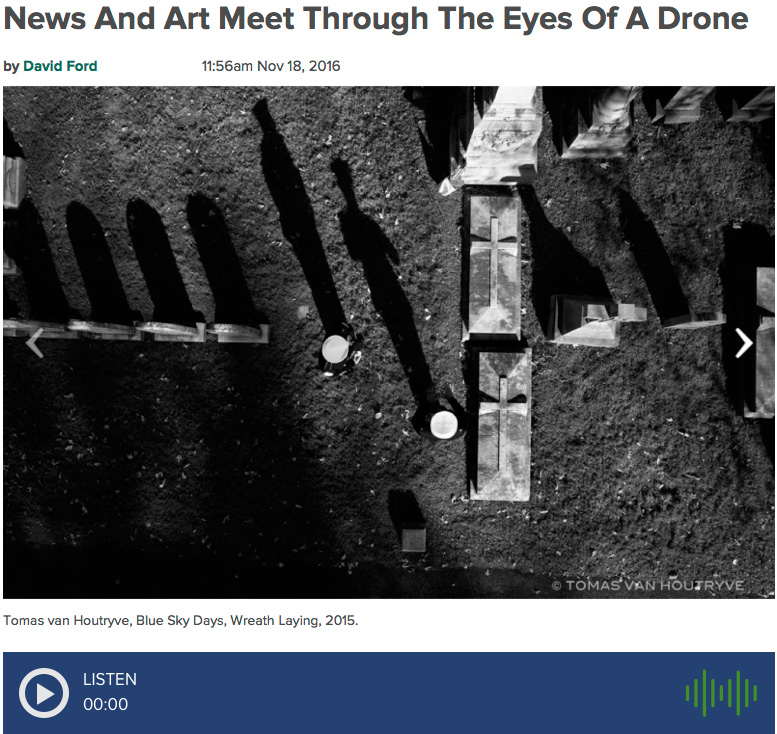 In a 40 minute interview with North Carolina NPR affiliate WFDD, I spoke about my two projects currently on show at the Southeastern Center for Contemporary Arts (SECCA), Blue Sky Days and Traces of Exile.

Publication: Leica M Magazine, Overshadowed by the Mine 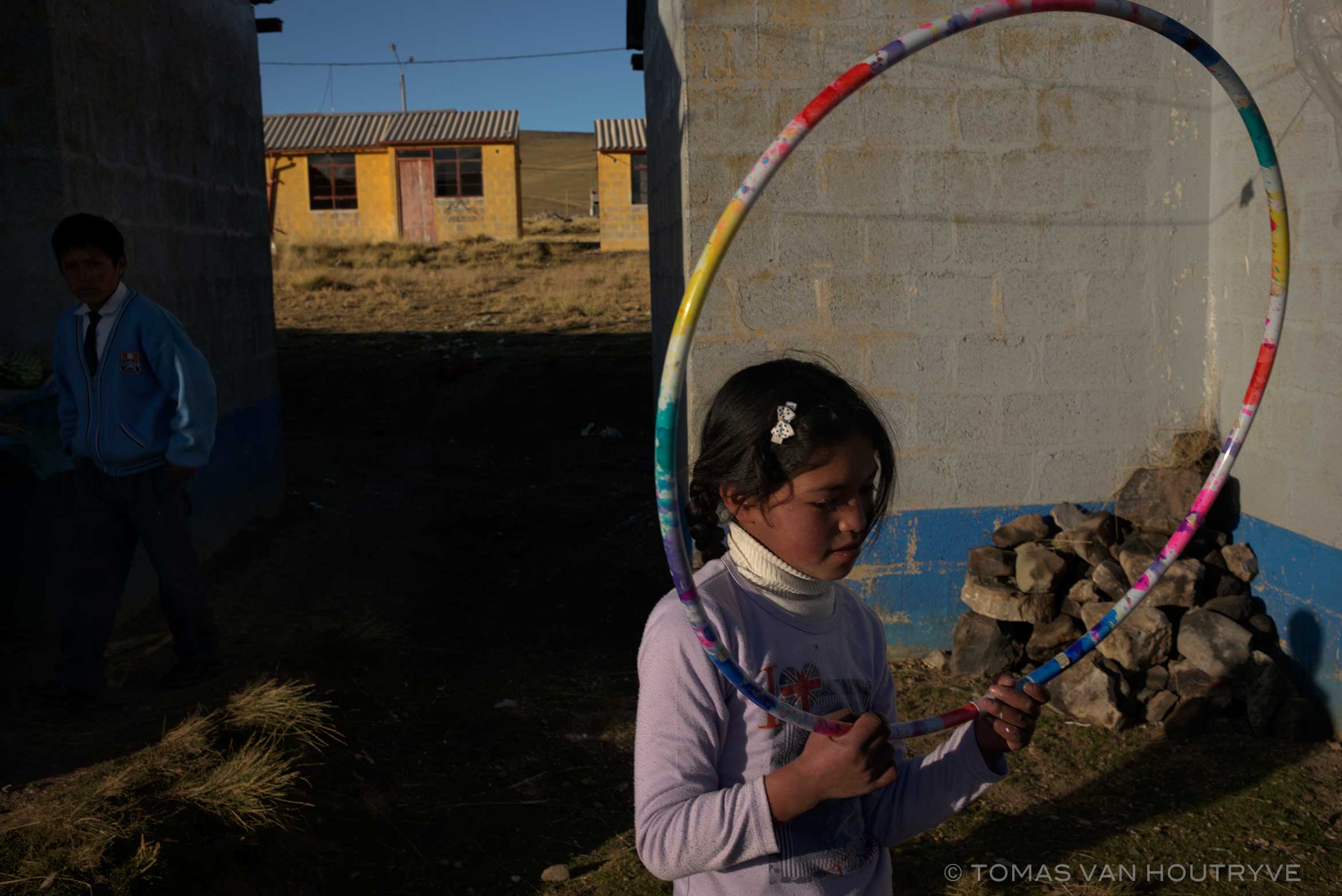 Leica’s M Magazine published my Mine Eats City series in their Spring 2016 issue. The series is about a city in danger of disappearing. High in the Andes mountains, a mine that once supplied the Spanish Crown with silver is now poisoning the 70,000 inhabitants of Cerro de Pasco, eating away at the very earth beneath their feet. An interview about the story which…  read more. 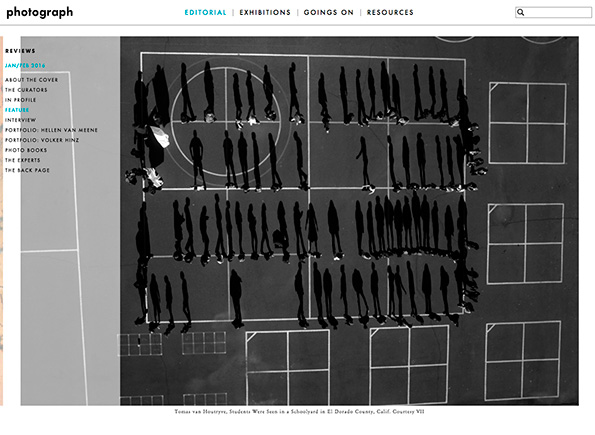 Photograph Magazine, a bi-monthly and online publication for photo curators, collectors, dealers and critics featured the Schoolyard image from my Blue Sky Days series in their Jan/Feb 2016 issue. Below is an excerpt from the article by Jordan G. Teicher, which is titled The Shifting Borders of Photojournalism and Fine Art Photography: “Disturbed by the lack of a visual record of America’s drone…  read more. 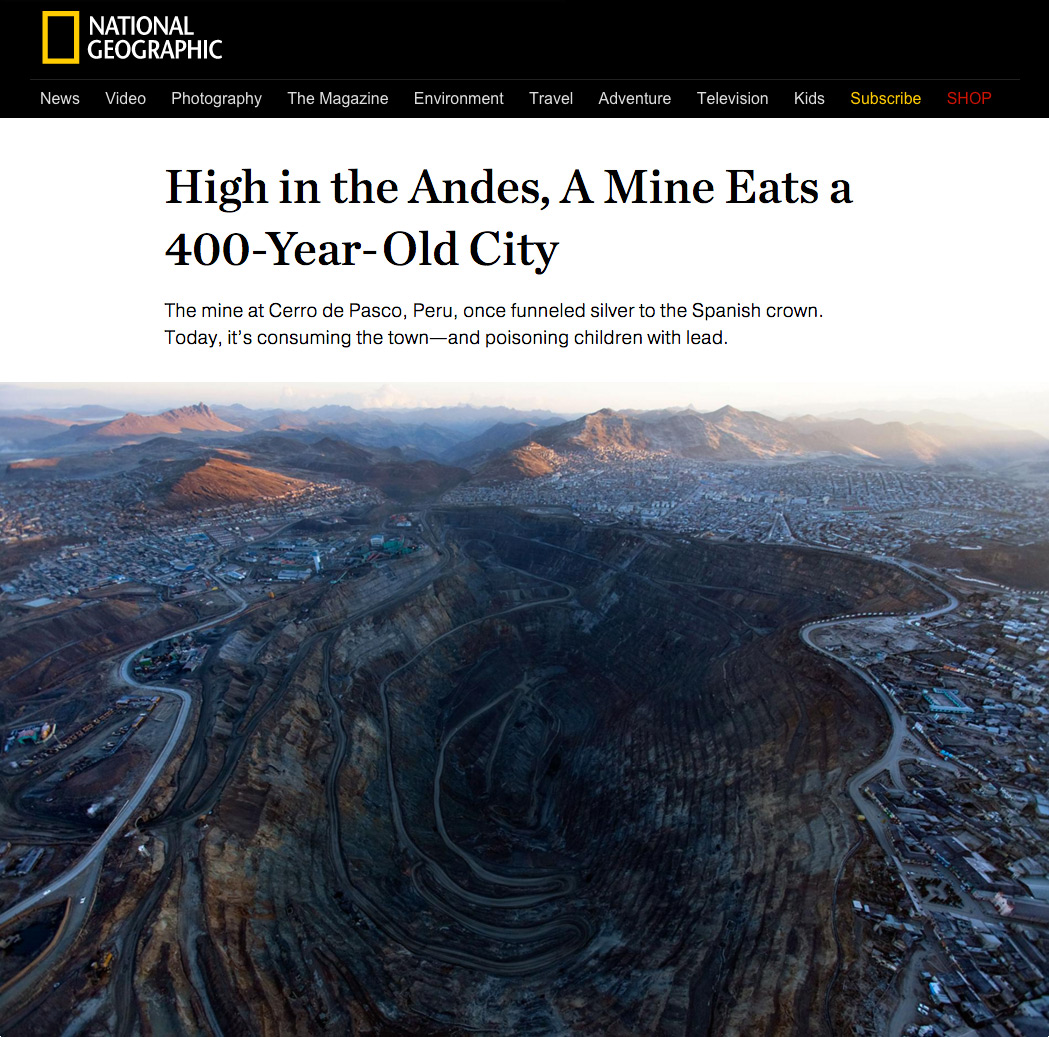 My photo story about a 400-year old Peruvian city being devoured by an open-pit mine was published on Dec. 2 by National Geographic. I spent two months in the high Andes city of Cerro de Pasco documenting the wounded land and poisoned children effected by irresponsible mining practices. The mine is run by Volcan and its local subsidiary Cerro SAC.…  read more. 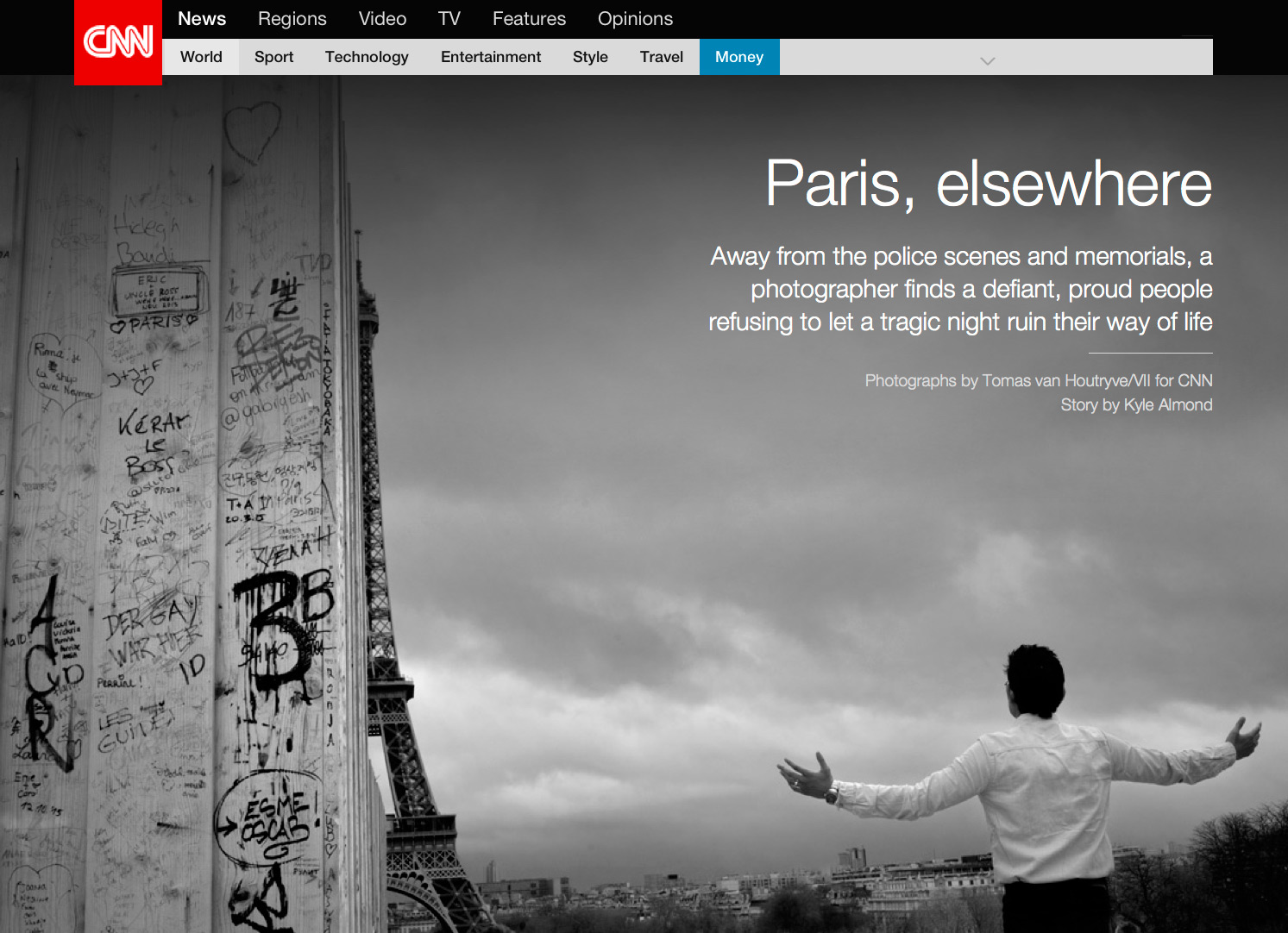 The morning after the November 13th terrorist attacks in Paris, I anxiously walked toward the Bataclan concert hall on boulevard Voltaire. I’d spent most of the night following the news as coordinated attacks devastated civilian targets across the French capital. It was the most violent night in Paris since WWII. As I made my way from Saint Germain, past Bastille…  read more. 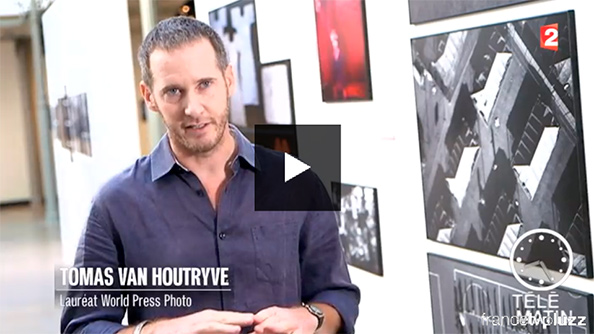 A television interview with me on Télématin, France’s most-watched morning program, was broadcast on September 15 on the France 2 channel. The segment featured my Blue Sky Days project, which is part of the traveling World Press Photo exhibition. The photos are on display in the Azzedine Alaïa gallery in Paris through September 27. 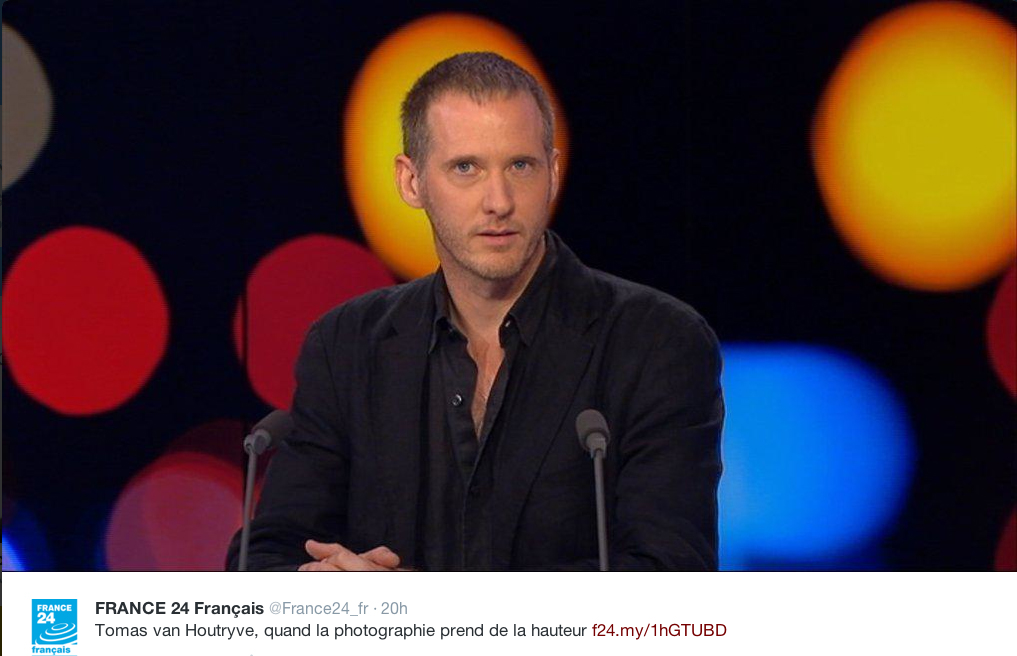 Emission en français   Live television interviews about my Blue Sky Days drone photo project were broadcast on France 24 on September 4, 2015. The interview in French was conducted by Louise Dupont, and the English segment was lead by Eve Jackson.   We spoke about the rise of drones both in their military capacity and their growing popularity among law enforcement agencies. We also discussed the…  read more. 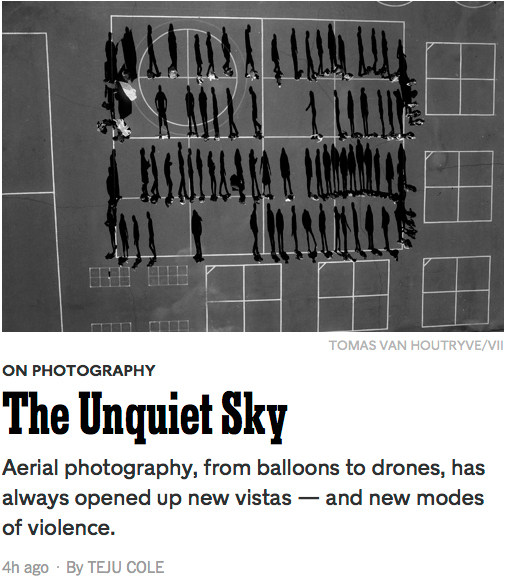 The New York Times Magazine reviewed my Blue Sky Days drone project in their July 26, 2015 Sunday Magazine. The article, titled “The Unquiet Sky,” explores the beauty and menace of aerial photography. It was written by award-winning novelist and Times photography critic Teju Cole:   “…The slippage between the domestic and the threatening aspects of aerial surveillance is something the photographer Tomas van…  read more. 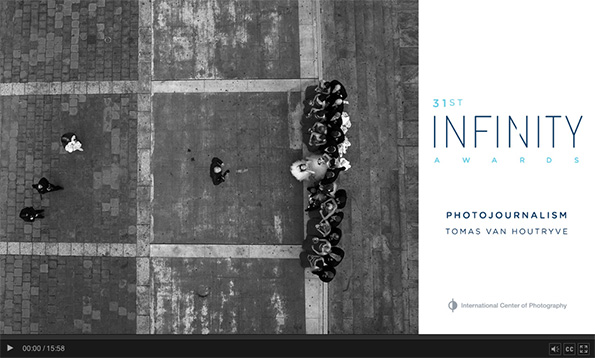